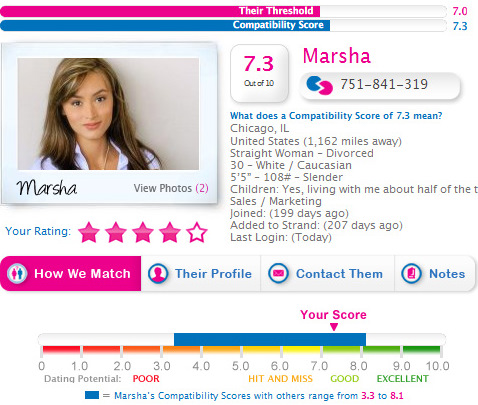 I started trying out online dating again after another year+ break from it. I have to admit I’ve been more successful so far then in past times. Perhaps because I have learned over time how to make a better profile. Although I’ve only been doing it for a couple of days so far. Hot or not has me on the “Local Hottest” list and my score hovers around 7, so that’s pretty good. I’m sure it would go even higher if I posted pictures shirtless because all the top people are all shirtless. Anyways, I digress.

In the past few days I have had a few girls who refuse to give me their facebook. They say, “Well I don’t know you.” No shit, sherlock, I don’t know you either, that’s why it’s called online dating! Some say, “Well can’t we just chat on here?” Anyway, it’s a bit irritating when a girl tells me this, because it indicates something else must be going on. Most likely, they are older or fatter than their profile pictures.

Generally, when I hear that a girl doesn’t want to connect anywhere but online it usually means that she’s lied about something big, or no longer looks anything at all like her pictures. I’ve avoided online dating because girls like to put pictures of themselves when they were 10 years younger, 200 pounds skinner, etc. Saying “I just want to chat on here” is a red flag for me because it usually indicates the girl has been dishonest about something major. Until I see someone in person or have compelling evidence (recent facebook photo) I can’t believe anything I see in an online dating profile.

Let me share an experience that helped bring me to this conclusion:When I first tried online dating several years ago, there was this girl and she had these great pictures of her like 80 lbs and great looking. After several days of chit chat and some long phone conversations I decided to go meet her. When I arrived at her place I saw this behemoth of a thing, I didn’t even think it could be her. I said, “I don’t see you” — sure enough, she was literally over 300 lbs, like a beached whale. She was enormous. Out of courtesy I talked to her for a short while and then left, but I should have just left. I was too nice. Turns out her dad had died and she got an eating disorder and gained almost 250 pounds. Could she really have thought I would be interested when her profile was essentially a completely different person? Sorry, but I know my level of attractiveness and I am not ugly. So the fact I am repulsed by gigantic women means that I do not have to date massively obese girls.Needless to say I avoided the online dating world for a LONG TIME after this experience. But I have had similiar experiences; it is very difficult as a guy to navigate online dating because a large proportion of the girls which have normal pictures is a complete lie; they are morbidly obese in real life. At least it’s beginning to seem that more obese girls are putting honest pictures of their obese selves so that I can gratefully delete them and move on.

I don’t know if it’s possible for an ATTRACTIVE person to find another attractive person using online dating. As an attractive guy, the only reason I’m bothering with the online dating is because:

* I’m looking for something serious, not a one night stand,
* I don’t expect to find any quality girl at a bar,
* I’m not interested in anyone at church, and
* Since I recently moved to a new city (and state) far from where I used to live, my social circles are slim and I haven’t met anyone I want to date yet.

If I was looking for something casual or maybe just trying to get laid, then it would be way easier. There are plenty of hot girls at bars, no need to try online dating.

The problem is, that any quality hot girl is going to become immediately bombarded with hundreds of messages a day, and it’s just not possible to check them all. I know, because when I did the hot or not and after getting a ranking I got on the hot list, I’ve been getting hundreds of “connections” per day. I’ve given up trying to reply to them. I can’t imagine how many more messages a girl would get.

So I’m not sure if it’s possible for “hot quality girl” to meet “hot quality guy” using online dating. I could see an average girl meeting an average guy. But frankly I’m just not interested in dating plain jane. I will not be happy and my dissatisfaction would be harmful to the relationship. Worse, I “dated under” once – she was attractive but less than myself, and it was terrible because she always thought I was cheating on her because she was convinced I was too good for her even though I wasn’t and I thought she was fine for me. So I am just not interested in that again.

Anyways, that’s my post for the day, hope you enjoyed it.

Why do we get angry at customer service?