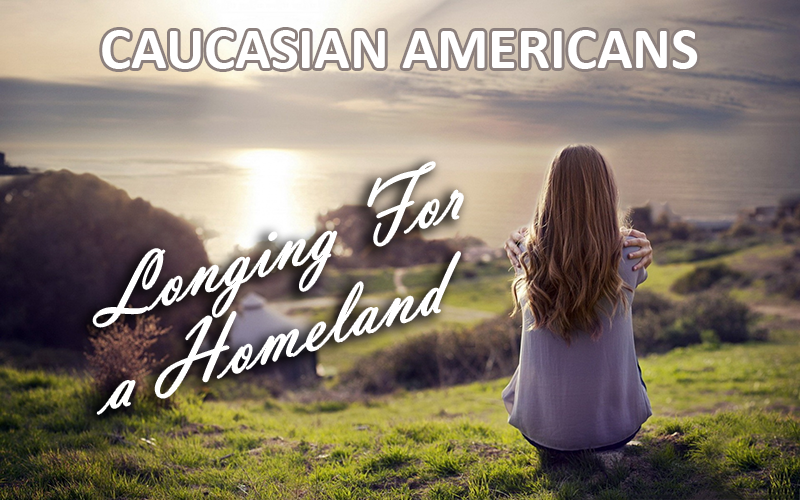 When I started researching this article, I wasn’t aware of the shocking conclusion that I would discover. Certainly, I understood that a large percentage of “white” Americans were not really white, due to the fact that hispanics classify as “white”, yet are clearly not actually white.

However, the result that I discovered is truly astounding: only 22% of Americans are actually white – that is less than a quarter of the entire country. An astounding 45% of non-whites are classified as white; that means that real whites make up one one-third of the total amount of people classified as “white”, while the other two-thirds of “whites” are non-whites with fair or tan skin including hispanics, middle-easterns, jewish people, people from India, and others. Read on to see the details. 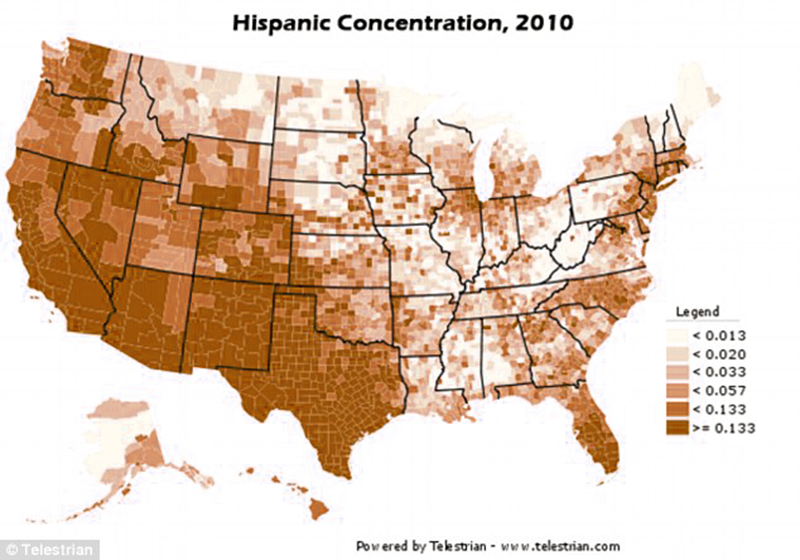 Officially, in 2012 the official number for hispanic population in America was 17%[1]. This was the middle of the Obama administration, so the real number was probably around 20%.

Since then, it is not inconceivable to estimate that the mexican population has increased by 50% in the last 4 years, based on numerous studies.

That places the total hispanic population somewhere around 30% of the U.S. population today. 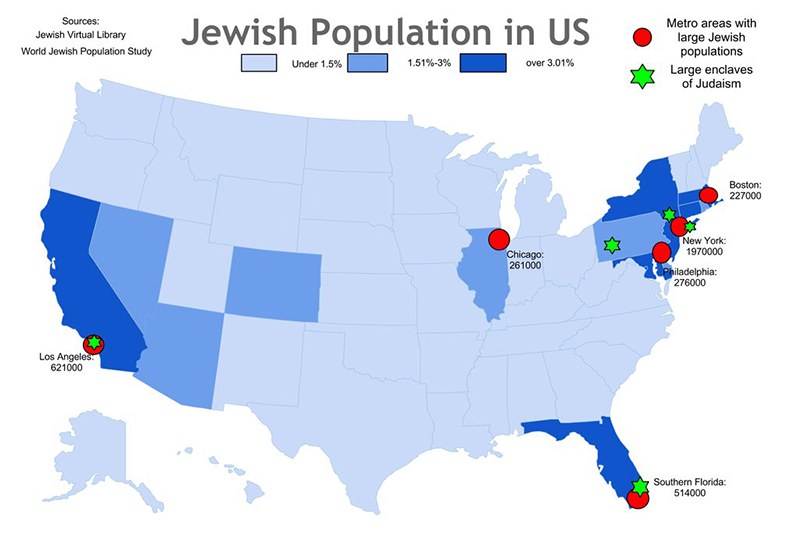 The Jewish population is not classified separately in the U.S. Census, as it was removed. Jews have said on national TV they are offended at being called “white” because they have to check the “white” checkbox since the “Jewish” checkbox was removed[1b].

The “official” number of total U.S. Jewish population is at 3%, as of 2015[2]. However, considering that many if not most Jewish people in America call themselves “white”, the real number is probably somewhere around 5% to possibly 7%.

In New York, the official number is 8.4%[3], but there, it is likely closer to 10% for New York. We will go ahead and use the 5% number for total U.S. population of Jewish people in the U.S. today – and 100% of these are classified as “white” since the U.S. census forms have removed the checkbox for “Jewish”, making all Jewish people classify as “white”. 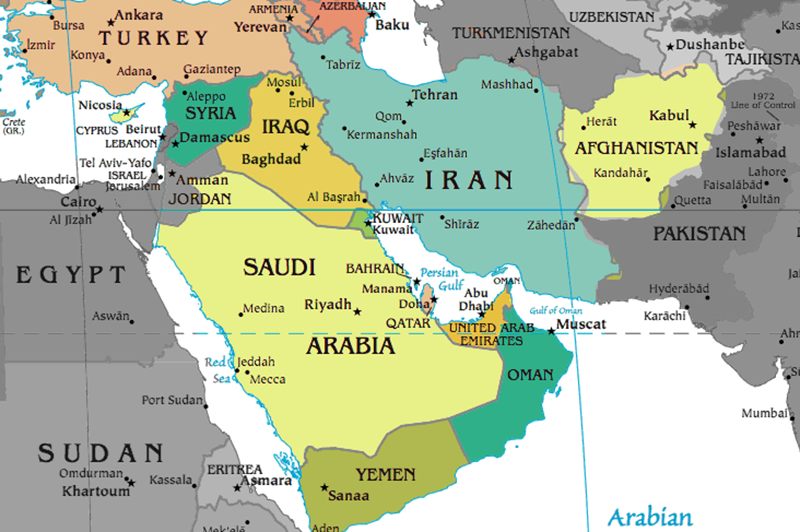 According to a recent article, the U.S. is considering “adding” a middle-eastern racial category[4]. If they have to add it, then that means that middle easterns are considered “white” in the U.S. census. Many may not even be aware of their ethnicity. In fact, the article distinctly says that “Under current law, people from the Middle East are considered white”.

The official number in 2010 was 3.2%[5] in 2010 (before Obama’s immigration policies took full force) – about 10 million; and considering that they are considered “white”, the real number is probably close to double, at around 6% in 2010 (18 million). Of course, with Obama and liberal open borders, this has changed, with many millions of middle easterns being imported into America in the last 6 years.

According to Breitbart, the U.S. officially imports 280,000 Muslim migrants alone[6] – and these do not constitute non-muslim migrants (or those who claim to be non-muslim) which is likely close to double that, as well as the population growth of present middle-easterns over the 6 full years from 2010 to 2017. Considering about 500,000 total middle-easterns imported each year for 6 years, and Muslim population growth of 1.8% per year, it is not inconceivable to consider that the middle eastern population has increased by at least 50% since 2010 (possibly much higher), putting the total number of middle easterns, considered “white” in the U.S. census despite being non-white, is around 9% of the total U.S. population today.

This is not counting “middle eastern” immigrants in America whose ancestors came here centuries ago, who are really caucasians from before the middle east became predominately muslim in places like Syria, etc. By “Middle Eastern”, we are directly referring to people like Iraqis, Afghanis, and modern Turks, etc. who are definitely not white. 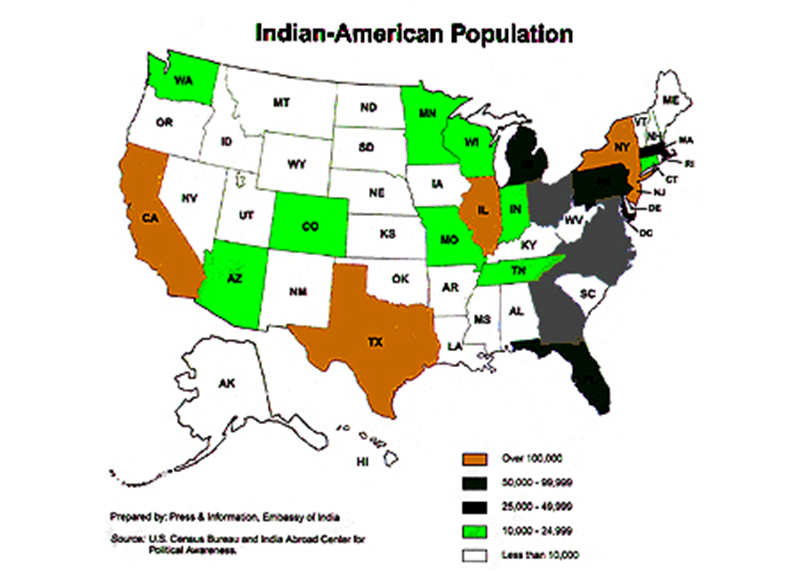 And now let’s not forget Indians (from Asia). Officially:

According to one source, “In recent years, an increasing number [higher than the previous 25% in 1990] of Indians are identified as “White” due to increasing immigration from the North-West of the Indian subcontinent, which is home to Caucasian ethnic groups within the country”[9].

It also must be noted that Asian Indian also includes the race categories of Pakistani, Bangladeshi, an Sri Lankan, which if light-skinned are also classified as “white” in the U.S. Census [9]. 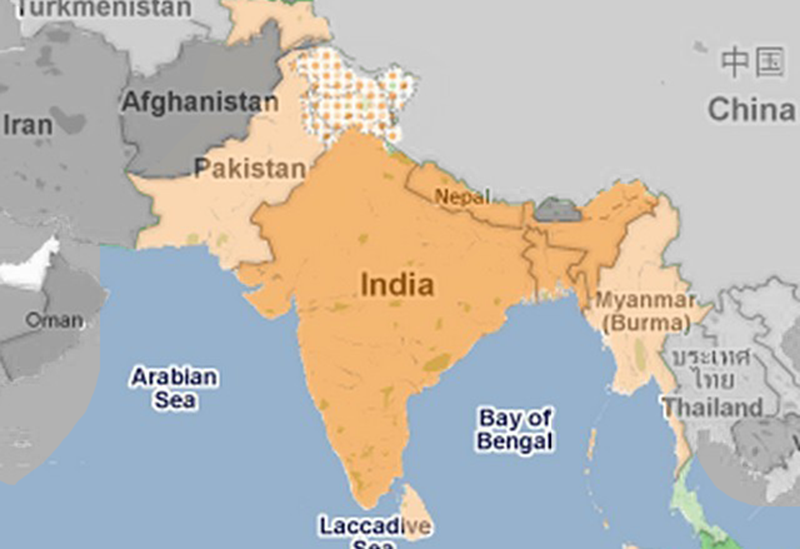 In 1990, IPUMS classified 1% of all Americans as Indian American from the above countries [9]. At that time, 25% classified themselves as “white”[8]. However, that number has grown both in population as well as percentage of “white” claims, as stated above.

Additionally, in America, people from India have the highest employment rate of all H-1B (foreign) workers. A source on migration policy in the United States describes, “Indian citizens are the top recipients of temporary high-skilled worker H-1B visas, accounting for 70 percent of the 316,000 H-1B petitions in 2014”, and “India is also the second-largest sending country of international students to the United States after China” [10].

According to another article, Indian Americans are actually a much-overlooked and very large population in the United States, with “Indian-Americans forming the 3rd largest Asian population in US” in 2014, at 3.34 million [11]. Of course, the 3.34 million is totally false, since it goes on to say that the population “shot up 76 percent in the first 12 years of the 21st century, a report on demographics of the Asian-American population released by the Center for American Progress said” [11].

Since in 1990 the population was 2 million of Indians alone [9], likely about 3 million by 2000, then a 70% increase from 3 million is another 2.1 million, setting the total of India Indians alone at 5.1 million for 2012. Then, considering the open borders of the Obama years, it would again be a reliable estimate to expect at least a 50% increase, although likely much higher; although we will stick with the conservative 50% number.

However, we can’t forget Indian-Americans from other countries in the Indian sub-continent. According to the article above, “Bangladeshi-Americans are growing at an exceptional rate — 177 percent between 2000 and 2010” [11]. 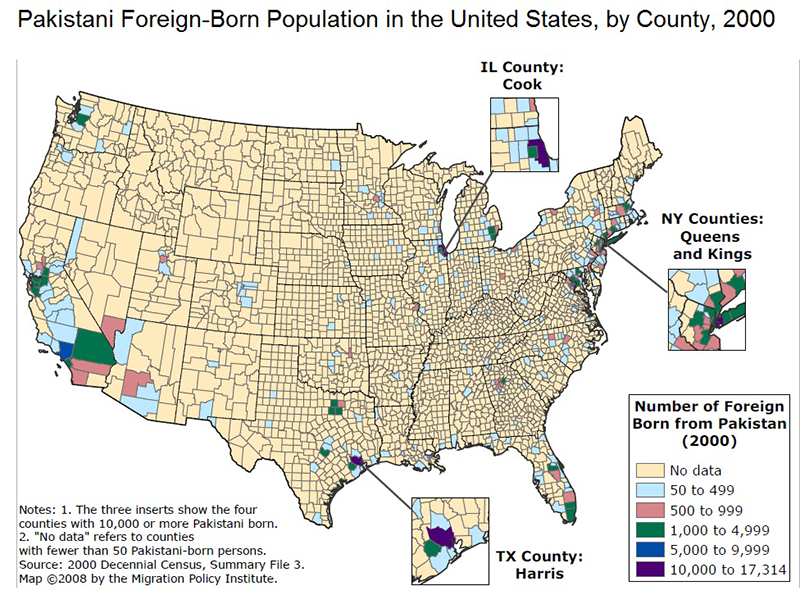 Then there is the Pakistani. There were 299,000 Pakistani in the U.S. in 1990 [9], and holding a similar ratio as the above countries, this is 5.6 times the population of Bangladeshi, placing a solid estimate of 1.6 million total Pakistani in America today.

It is likely that 70% of these people from the Indian sub-continent are light-skinned. Interestingly, in confirming my estimate with solid research I discovered the 70% number of light-skinned Indians is exactly correct, as confirmed by the Popular Science magazine [13]. These 70% would classify in the U.S. census as “white” and would elect to call themselves “white” as per the information in the supplied articles. The other 30% classify themselves as “Asian”, “Black”, and “Other” (write-in race) [9].

So now let us add up the totals. Total population from the Indian sub-continent are 2,121,635 Pakistani, Bangladeshi, and Sri-Lankan. Let’s just say 2.1 million. The U.S population is 325 million today, so this isn’t huge – at about 0.65 percent.

However this is added onto the 2.35% that is Indian (from India), which brings that number up to 3% of the total U.S. population for countries classified as Indian-American (not to be confused with Native American Indian).

Considering that out of the 3%, an estimated 70% will self-classify as “white” (for various reasons), this means that 2.1% of the total U.S. population for countries classified as Indian-American call themselves “white” despite not being actually white. 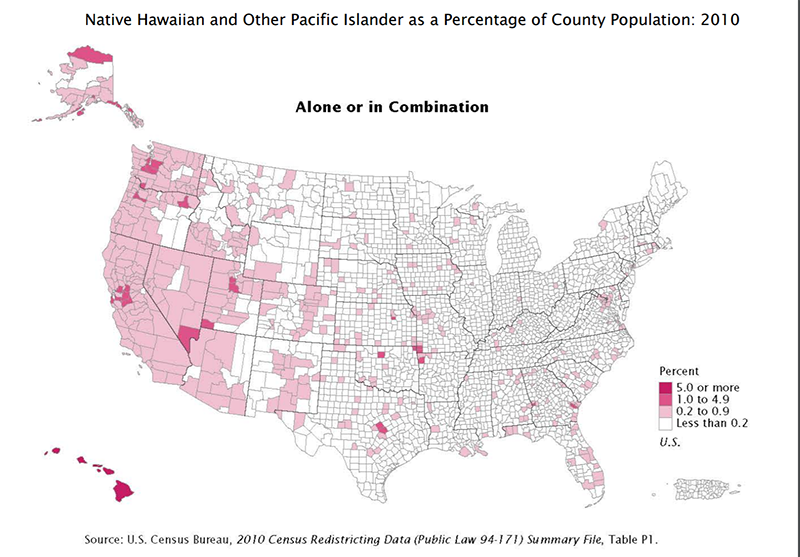 There are also Pacific Islanders, who are not white but many will classify themselves as white. A good estimate is that 50% of pacific islanders will classify as white while actually not being white.

There were a total of 1.2 million officially in 2010 [14], which is likely increased by the population growth, which is probably around 10% more since then, setting the total estimate at 1.32 million today. If 50% claimed “white” ethnicity, then 0.66 million are non-whites claiming to be white. That is 0.2% of the U.S. population of Pacific Islanders classifying as “white”. It is not a huge number, but everything adds up. It is also only a conservative estimate, and could be much higher, even close to 1%.

Mulattos (part-white products of miscegenation) are another concern – unsure of their heritage/ethnicity to identify with, many mulattos may choose “white” even though they are polluted and hence not actually white. It would not be inconceivable to estimate between 0.5% and 1% of America as mulattos calling themselves white despite not being white.

The official number of “two or more races” is 2.9% [15], but that includes non-white mixes, like hispanic and black, for example, which would not identify as white since there is no white at all. Rather, the referred “mulattos” include white-hispanic mixed, white-asian mixed, white-black mixed, and white-indian mixed.

44.7% of The Total Population Of Americans Classify As “White”, But Are Not

True White Americans Are A Small Minority In America

Here is a map showing the true projection size of Europe. Yes, it is tiny, and yes the map you see on Google Maps is wrong (Mercatur Projection maps as is used by Google Maps show the drastically wrong stretched size as you go north).

White people are a very small minority in America. Yet we are told that we are numerous, or even a minority. This is a blatant lie. Let us now look to see the total number of actual whites in America.

This means that 72.4% – 44.7% = 27.7% of America was actually Caucasian in 2010. That is right, Caucasians in 2010 made up barely a quarter of America in 2010. Of course, the Mexican population has exploded since 2010, but I included a current percentage of Mexicans in my breakdown, so the percentage should be consistent.

Subtract the 44.7% that are not white but “classify” as white, from 67% which is the “official” number of “white” people of which the majority are not actually white, and you get the real population of Caucasian Americans in the U.S. today:

Only 22% of “White” Classified People In America Are Really White 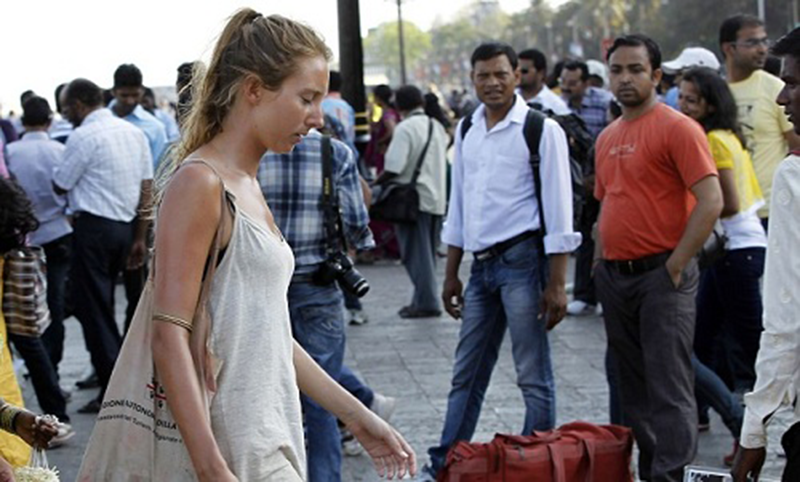 The true racial ethnic demographic makeup of America today therefore is this:

True white Americans have been a true minority in America for likely well over a decade – possible 2-3 decades; and today we are finding our own so scarce that White Nationalism is starting to take root in many whites in America today.

Racial Self-Segregation in the United States 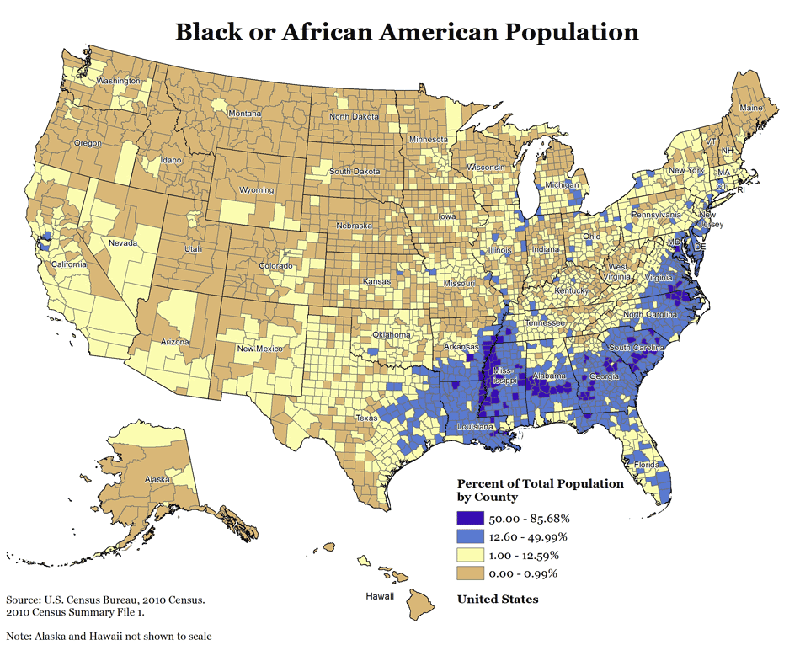 Most blacks are centralized taking up half of a city, where there are black neighborhoods with nearly 100% blacks. Atlanta, Georgia and the south side of Dallas, Texas are two big ones that come to mind. This composes most major cities in the United States. Additionally, a large percentage of blacks live in the South – that is, the Dixie area of the United States, including the Carolinas, Georgia, Alabama, Mississippi, Louisiana, and surrounding states.

Large numbers of Asians are either in California, Washington (state), or New York (think Chinatown), although there are large communities of predominately Asians around many major U.S. cities. 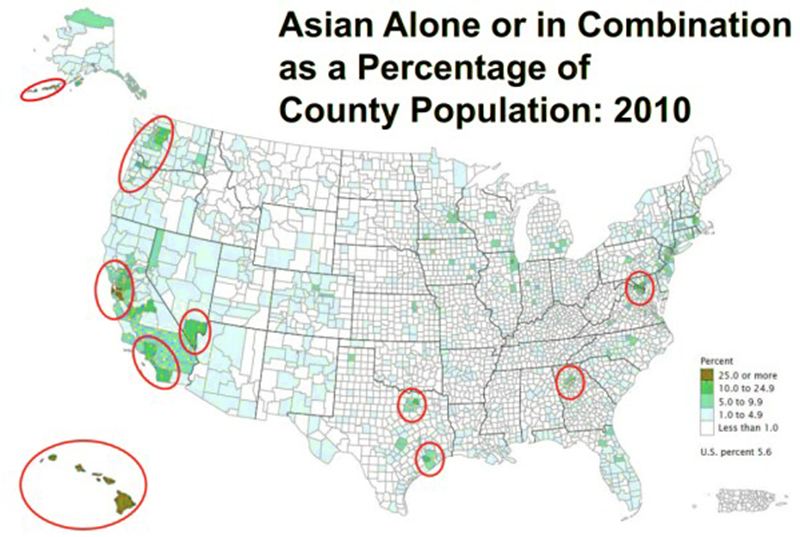 White People Have No Place To Call Their Own

Whites, however, have no place to call their own. In fact, it is made illegal for white people to have a freedom of association with other whites – even though every other race is allowed to have their own, including hispanics, blacks, asians, and even Jews. While there are some small cities with a dominant white population, most cities are not white.

White people try to make their own communities, but then forced diversity “laws” force “minorities – that is, anyone who is non-white even if they are a majority in this country (like hispanics and blacks in many areas) into white neighborhoods, forcing whites to leave.

Please share this article with your friends and on forums and social media to get the word out there – whites are not a majority and we don’t have any “privilege”!

The first step to finding a homeland is letting people know that we really don’t have one anymore.

Did Trump Brag About Having The Tallest Building In Manhattan After 9/11? True or Busted? | SnopeBusters