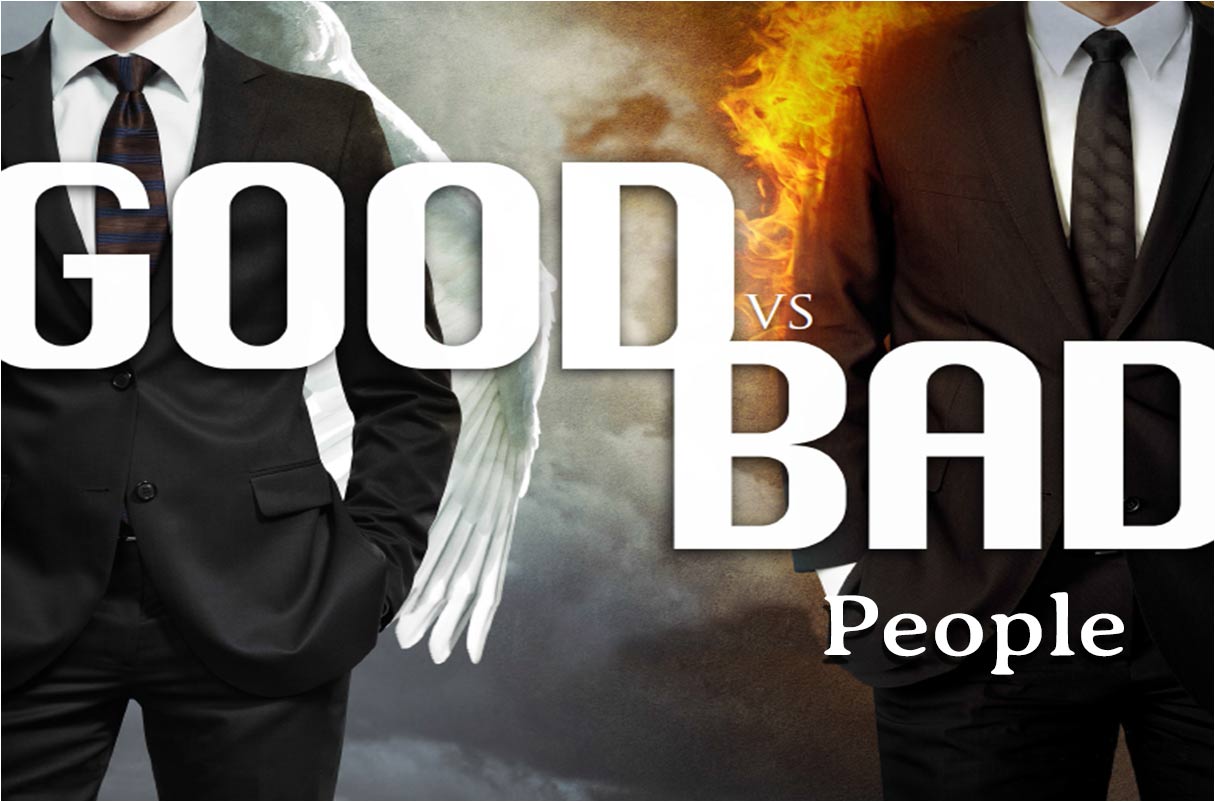 I used to think that all people were good. I was brainwashed. Now I believe that most or at least many people are inherently good, although some are bad at being good; but some people are truly evil, to their very core. If you aren’t made aware if these truly evil people, you will just get taken advantage of and hurt, again and again. Some good people are good at being good, and as a result, they are well liked, usually. Except by bad people. Bad People hate good people, especially the good people who are good at being good. You’ll find these good people working at the soup kitchen, giving money to the beggars on the street, writing thank you letters and birthday cards and truly meaning it to everyone they know, cheering for their kids at soccer practice, taking in that stray dog or cat, and calmly and kindly controlling a classroom of inner city kids, because they are respected by the kids. They might often donate half or more of their money to the poor, drive a beater car even though they make over $100,000 per year, donating clothes and food to the local food bank, and helping out at the local shelter. Not all good people are good at being good Some other good people are sometimes bad but are usually good, and at least try to improve when they are bad because at heart they are a good person

Another kind of good person is similar to the previous one, except sometimes they do bad things. Not just mistakes, but bad things with bad intentions. You could say, they are temporally a bad person. However, overall these people are still good people. They could use some help to overcome being bad sometimes, and they actually desire to never be bad, often taking steps to change.

Many people have been hurt, either physically or psychologically, by these good people who acted bad. It’s unfortunate, and if you’ve been hurt by one, you might even think they are a bad person; but they are not a bad person. They just do bad things sometimes. They need some help to change. Often the reason they do bad things is because they have been hurt or even brainwashed by an actually Bad Person. So what you’re seeing is not the good person, but actually a reflection of the bad person from this good person’s past, usually a bad parent or bad family member. Please forgive them and help them become more good.

But be careful that you’re not actually dealing with a “Bad person who pretends to be good in public but not at home, and are an expert at it” (see below to read about these kind of people), because these good people can often be confused for those kind of bad people. Bad people who pretend to be good people

Some bad people are really good at pretending to be a good person. They will often use this to their advantage, exploiting good people and gullible good and bad people by pretending to have good intentions, but really having some selfish, or sinister, or devious, or in some way malfeasant, nefarious, or detrimental purpose, usually to cause personal gain or to cause some harm to another. Other bad people don’t care what anyone thinks. These are one of the worst kind of bad people because they don’t even give the illusion of goodness, except by accident sometimes. Whereas some bad people pretending to be good might accidentally or inadvertently do good, these bad people do not even pretend to be good, they just do whatever they want. These bad people need to be “put down” (like a dying dog), or tortured until they have some sense. However, in reality don’t actually do this, because it’s easy to confuse this kind of bad person with the latter good person (the one who is truly good but makes so many mistakes they appear bad). It would be tragic to treat one of those good people who accidentally acts bad, like one if these bad people. Unfortunately, unlike The Terminator, it’s often difficult or even impossible to distinguish which is which. Which unfortunately means that these bad people get away with much more than they should. Bad people who pretend to be good in public but not at home, and are an expert at it; they are the most evil of all

The third kind of bad person is a little of both of the above two types of bad people. These bad people pretend to be good people in public, but at home they act like the bad person they really are, in the form of an abusive spouse, abusive parent, or some other type of bad person in their home life. This is the worst bad person of all, because these are the most conniving, deceitful, manipulative bastards you’ve ever met, and you’ll never even know it.

These evil bad people never try to do good; they just pretend to be good in public, but never actually do anything good. As a result it’s impossible to tell that they are at home beating their wife or stabbing their husband or raping their children. Their family at home knows, of course, but are usually too scared to tell anyone. The few bold enough to tell, are not believed, because the bad person is such a master manipulator that not once on their life have they ever slipped up and acted bad in public. These people should be killed upon sight, to prevent their DNA from continuing on. Unfortunately, they are so good at being sneaky lying manipulative bastards that you will never know who they are, unless you hear about one on the news. Bad people who pretend to be good in public but not at home, are not always the best masterminds; on a very rare occasion are actually good; but are usually evil

Most of the time, they are not just bad, but truly downright evil. Worse, they usually get away with it: abusing, stealing, lying, manipulating, neglecting, and worse. They often do have boundaries and some false sense of morality, like no killing, or selling drugs. Instead, they do things like kill their family members psychologically instead with constant beating, brainwashing, intimidation, and isolation; and might overmedicate their children for fictitious “issues” as a way to control them. It’s just as bad, yet somehow in these bad people’s twisted mind they are able to justify it. Some may even believe that in literally torturing and abusing their family members, that they are doing the right thing. In reality they are just lying to themselves. Somewhere deep inside they know what they’re doing is wrong. Like the worst evil people, outsiders would never guess that home life with these bad people is hell on earth, or worse. Their victims either are too afraid to speak up, or no one believes them when they try. As a result, these bad people usually get away with it.

Some bad people can change One thought on “Good People vs Bad People”

Did Trump Brag About Having The Tallest Building In Manhattan After 9/11? True or Busted? | SnopeBusters