While tipping really sucks and it sucks that your already high priced meal has to cost you even more by tipping, the truth is that if you can’t afford to tip then you should not be eating there. If you have so little money that you cannot give a few spare dollars to a waiter or delivery driver, then the truth is you should be cooking at home and should not be eating out at restaurants; and especially not ordering delivery.

The reasons why many people don’t tip is first because of a misconception about delivery charges – for example, a pizza chain charges a tip-sized surcharge (as much as $3 or more), leading customer to think they included the tip in the fee. In reality, this surcharge is not given to the driver, but is simply highway robbery – pun intended.

This surcharge just lines the pockets of the executives. As a result, far fewer people order delivery, and the restaurant makes less money. Then they raise the delivery fee to compensate for their loss in business. They just aren’t learning their lesson. The driver usually gets none of this surcharge. 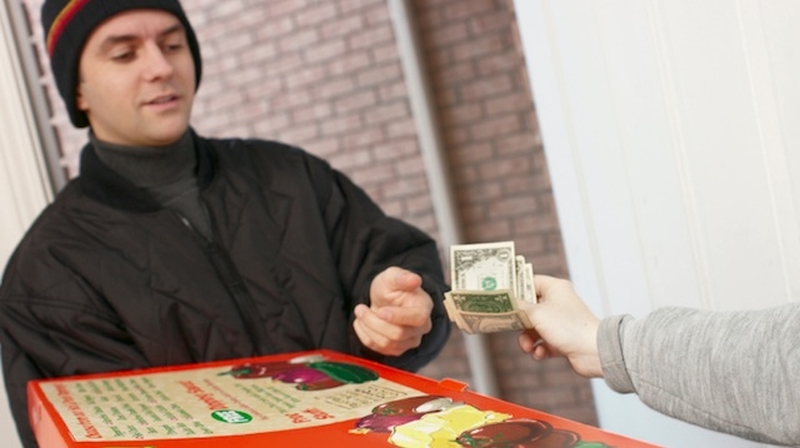 Another reason people don’t tip is because they don’t think it’s fair that the restaurant is passing on their costs to you, the consumer. They should be paying their employees a fair amount instead of forcing consumers to pay higher prices for the meal by having to pay more than half of the wages of the employees serving them.

The problem with this line of thought, is first that it is completely true, and second, that it is ineffective. While in the extremely long run, as in, 50 to 100 years, this might make an impact if mass people stopped tipping, in reality I do not think that enough people can bear to not tip to make a significant difference. As a result, by not tipping, all you are really doing is causing that poor slave to not get their honest slave wages. Their employer certainly is not paying them even remotely fairly, so if you don’t tip them then you are causing them to slave away for nothing.

The third reason that people don’t tip is because they – rightly – see themselves as in an employer position. It is true that since you as a customer are paying the majority of the wages of the waiter or waitress, then technically you are their employer. They are working for you, and you are paying them their wages. Some people believe that if the waiter or waitress does a bad job, they should not get paid. I believe this is a bad line of thought.

While in some rare and extravagant circumstances, such as the server was outright rude despite you being extremely nice – say they were a black lives matter activist who refused to be kind to good white folk, calling them cracker and honkey and redneck and other racial epithets – in this case they don’t deserve any tip. But say they made a mistake on your order, dropped your food, or simply didn’t come around enough. Do you have any idea what it’s like to be a server in a restaurant? If you think you shouldn’t pay any tip because the server did not do the most amazing job (or even a particularly good one), this is a very poor way of thinking. Unless they offended you so highly you felt the need to walk out of the restaurant without paying, then you should tip them at least a fair amount – at least 15%.

The truth is, what goes around comes around. You treat others how you want to be treated, and sooner or later people will treat you the same way. If a server does the worst job, but is really trying – say they got frustrated, flustered, were not particularly friendly, got 3 orders wrong, dropped your food making you wait 30 minutes longer, and didn’t refill your drinks. If you think this is a reason not to tip them, you are wrong.

For all you know, that person is a single parent with 2 children at home, their 25-year-old car just broke down and they had to take the dangerous bus to work, they are falling behind in their grades due to financial issues, and due to a lack of proper nutrition and being completely overwhelmed in life, along with a death in the family, they are having memory problems.

These are not unusual circumstances for your average waiter or delivery driver. If you were in that situation, could you honestly say that you could maintain a perfect genuine smile for demanding customers for 8 hours straight and get every order perfect? Of course not. And if you really were a superman and could do that, well you wouldn’t be a waiter for very long, would you. You’d be moving up fast in life. Any server who does an exceptional job, considering their position in life and still ability to put on a smile and get orders right, they deserve an exceptional tip. If they don’t smile at all and even get orders wrong, then they only deserve and average tip. Conversely, actually, if you are feeling generous, the person getting orders wrong and not smiling is probably the person who really needs that exceptional tip. They are probably going through a very challenging time in life to be so sad and not thinking clearly.

The truth is that these servers are wage slaves making just a couple of dollars per hour in wages and the rest are tips. Yes, the restaurants are taking advantage of them by passing their wages on to the customer. But if you deny their wages, you are being extremely insensitive to their terrible life predicament (you can’t possibly be in a great time in your life and be a server in a restaurant!), and you are denying these impoverished people their honest wages, often good people who are trying to work hard to get by the best that they can.

By stiffing your waiter or driver their tip, you aren’t making the world a better place, because it isn’t going to influence the restaurant to start paying honest wages (in that case, avoiding the restaurant is more effective). You aren’t motivating the server to work harder, just teaching them that the world is an even more cruel place. And you aren’t doing a good thing for anyone, but your own wallet. And if your only reason is to help your wallet when you have more than them, well that is a very selfish way of living. You will get what’s coming to you sooner or later. 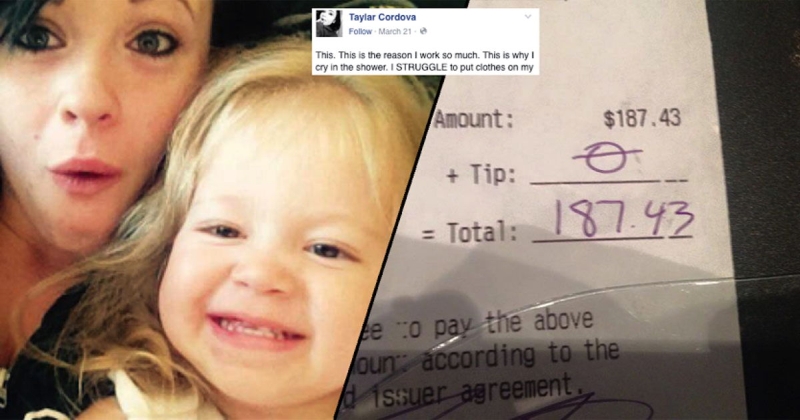 If you honestly have enough money to eat at a restaurant or order delivery, then you have enough money to tip your server or driver. Most certainly, you have more money than them. If you don’t, then you should not be eating out or ordering delivery, because you are stealing the wages that could have been given by the next customer who would have taken your place and given an honest tip.

I worked as a server for a short time in college, and it was grueling. It is not an easy job, and you get paid nearly nothing unless you are the best and get lucky with good customers. If you are not in a good place in your life, as is the case with most servers and delivery drivers, then it is extremely difficult to maintain a smile, when that isn’t how you feel inside. Worse, with illegals taking all the low-skill jobs, there are very few jobs left for Americans who can even find a job that doesn’t require a degree.

These poor people without any degree or skills or experience, take what they can get. Serving or driving as a delivery driver is one of those, and only because it is such a terrible job that whenever people get good enough circumstances to leave, they do – or get fired. As a result, there is a very high turnover for restaurants, which is why nearly every restaurant is looking for new servers and drivers. 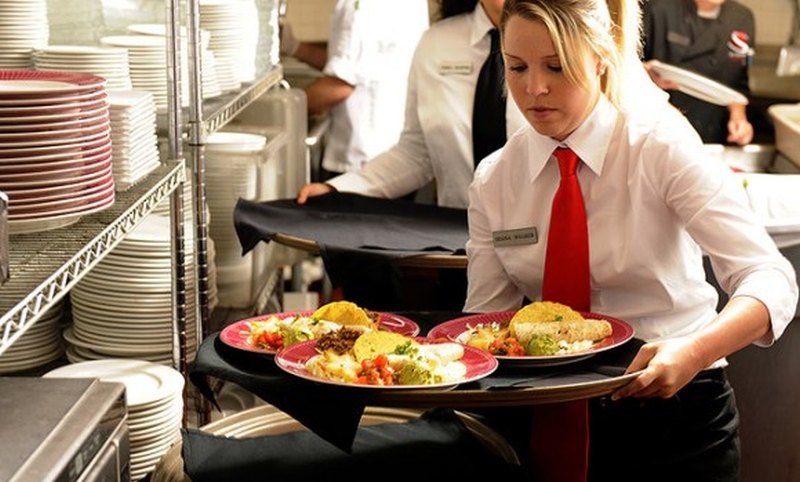 So open up that wallet. If you are honest with yourself, what’s a few more bucks. And if you can’t afford even that, then it’s time to reconsider hiring restaurant or delivery service, and start thinking about ways to get out of your own tough financial predicament. When you go to a restaurant to be served or you order delivery, you are literally becoming an employer. It is now your responsibility to pay the employee their wages.

The way you treat others in life is the way you will be treated, sooner or later. You definitely will get what is coming to you, whether it’s good or bad. If you are generous in life even when you have little, you will be surprised how this actually comes back to you one way or another. But if you are stingy and a tightwad, denying the poor who you hired even a couple of dollars in tips, then you can be sure that one day when you run into a hard time, no one will be generous with you, either.

In short, while I believe it is perfectly reasonable to try to lobby that restaurants should not be allowed to pay nothing and pass wages onto the customers and call it a “tip” (since it is not an extra pay but actually an essential part of the base wage); and while I believe it is perfectly reasonable to completely avoid and not to patron a restaurant because they pay their employees poorly; it is not however ok to not tip, because all you are doing is hurting a hard-working person. 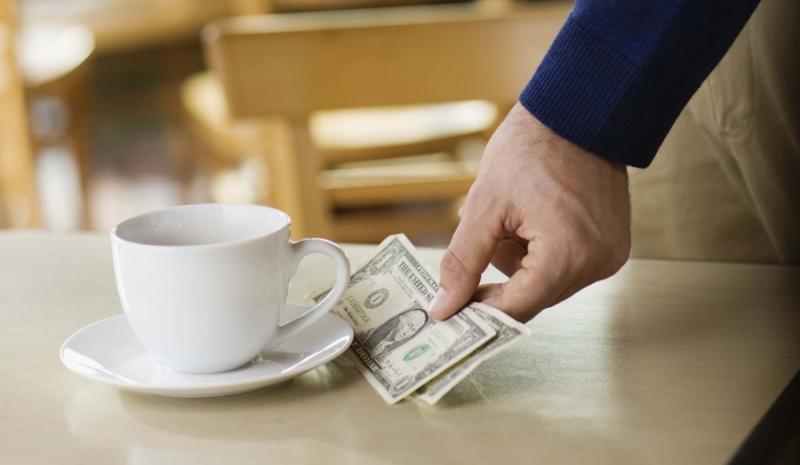 That is, unless they are outright evil. However, sometimes, even if they are rude and disrespectful, they may just be having a hard time managing their life, and their emotional trauma is being taken out on you the customer. it is not your fault, nor is it particularly the server’s fault. They really don’t deserve to be stiffed on the tip except in the most vile of circumstances.

Just remember, if you are generous with good people, this will come back to you. But if you are generous to people who are not even good to you, this will come back to you even more. If you are good to people who need it even when you don’t think they “deserve it”, life has a way of making sure that when the time comes that you are in need, someone will be there for you also. So be generous, be friendly, be open and sharing with people. And if you can’t afford even that, just remember you shouldn’t even be there in the first place until you can.