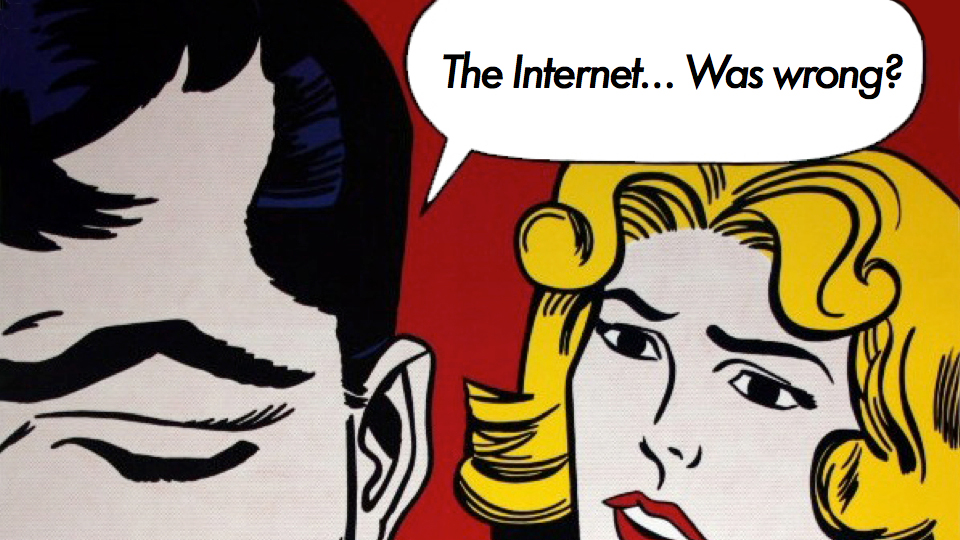 Okay, so it has been a couple of weeks since I started online dating. I have been becoming discouraged. Not because of lack of interest, mind you. I am becoming reluctant to even want to meet with any girls, because I have yet to meet a single girl who looked anything like their online profile.

So far I have met three girls. I have 5 others who wanted to meet, but I’ll tell you why I didn’t in a moment. The first one didn’t look like her profile at all. Yes she was blonde and yes she was a girl, but I don’t know if it was the excessive makeup or what, she just didn’t look like the pictures. She was not fat, but was not as pretty as her profile. I think perhaps she was also 5-7 years older than her profile too, which might be why I was not at all attracted to her.

The second was a very similar story. The third was very disappointing. In her pictures, she looked skinny and in shape, young (like early 20’s young), and quite attractive. Her pictures made her seem like she had class (as in not low-class), and one had her sitting at the pool in a bikini looking pretty hot. It showed she had a large tattoo on her side, which I didn’t fancy, but if that was the only thing wrong I was willing to let that slide. Moreover, she wrote a lot of things like how active she was, and even her username had the word “wakeboarding” in it. Leading anyone with any intelligence to believe, logically, that she was in shape and fit. Not fat.

So the day of the date arrives, and she says she will be a half hour late. Then 1 hour late. Finally she said she was almost there, but didn’t actually show for almost another 45 minutes. When she finally walked up, I was dressed nicely in a button down shirt, ironed khakis, and nice casual dress shoes. I was appalled at her appearance. She was not obese – per se – but was certainly getting there. She looked nothing like her profile. Me estimate is 35% to 40% bodyfat. Worse, she was wearing the most unflattering clothing. A tank top that looked like a painter’s cotton tank top, with her boobs just hanging out. Jeans with paint all over them. She looked like she lived in a trailer park. Let me put it like this – I remember her teeth were normal, but in my mind when I think of her I visualize a redneck with crooked teeth. She had a double chin, and the flab on her arms flopped around when she moved her arm. I was embarrassed to even be there with her.

As for the other 5 girls who wanted to meet, on their profile they looked in shape and attractive. However I got them to give me their Instagram or Facebook, and what do you know, they were not attractive, most of them had gained a “few extra pounds” since their original profile pictures were taken. So I did not bother and just stopped replying.

There are still two other girls that I haven’t excluded yet who are interested in meeting, but I am so reluctant to even meet them because of my past experiences. I’m pretty much giving up with this online dating thing. There’s plenty of girls I pass at stores and going about my day that are attractive to me. I will just ask one of them out.

I’m dubious that any real (existing) hot girls actually exist on online dating. In my opinion, anyone who can get a date in real life won’t be dating online, unless they have an ulterior motive. Three strikes and they are out. If I end up single a year or two from now, maybe I’ll try online dating again; but really at this point I’d rather go to a bar (which I don’t like to do) to pick up girls – I probably have more of a chance there, even though statistically less than 1% of people actually meet their spouses at bars. Well at least I won’t have to waste my time anymore with lying fat chicks pretending to be hot online!

I’ve yet to ever hear of two truly hot people dating online. And if it has happened, it is probably one in a million. Literally. Moreover, we all know (or if you don’t, you should) that Match.com and all those other sites pad their sites with fake profiles of hot women, just to attract users. My bet is that 99.9999% of the hot girls on online dating either no longer look like it, or they don’t exist at all because the dating site made the fake profiles to attract users.

If you have ever had a good date with a hot girl online, please leave a cvomment below. However, you must provide proof because it’s probable that anyone saying it happened is actually working for one of those dating sites.

All this said, let me tell you some of the top places to meet women in real life:
Best Places To Meet Women

There Is Actually No Such Thing As A Midlife “Crisis”

California Has Withdrawn From The United States Union .. Unofficially. The Former Golden State Is No Longer Governed By The U.S. Constitution